The crew from Upland Accesss are on a well earned break and they will need it as next year is promising to be just as busy as this year, which is really great news
wishing everyone a good new year and all the best for 2012

Sent from my HTC

Working with a 2000 year old colleague at Crinan 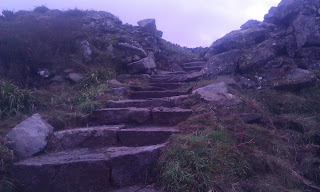 We had the privilege of working on a 2000 year old site at the top of the Crinan Walk in Knapdale district near Lochgilphead. Great care was taken to build stonework that tied in with a Dounie - a stone fort- that was build by someone like us but a few years sooner. 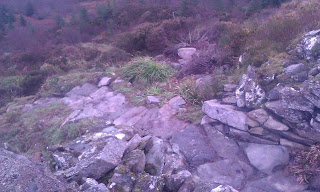 Recent Helicopter Lift for the Forestry Commission in Knapdale, Argyll at the Crinan walk.

We have a couple of stints of Path Maintenance ahead of us- as long as the weather holds. Schiehallion for the Johm Muir Trust and the hills in the Angus Glens, Loch Brandy, Corrie Fee and Mount Keen 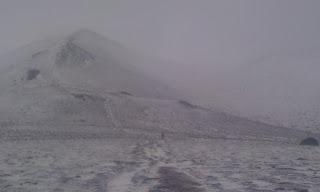 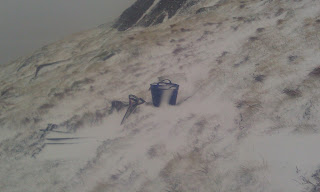 We are in our last week at Bynack More, working at about 3000ft in the RSPB estate of Abernethy in the Cairngorms. But winter is fast approaching and its natures way of telling us to start heading to lower areas for the winter. Will we heed nature? Watch this space!

Showing our work on Flicker Stone Benches, Bennachie Totem Pole, a photo by uplandaccess on Flickr.
Thought it was a good time to share some of our work and also some of our views to a wider audience.

Our team has recently carried out essential path maintenance for the John Muir Trust  at Schiehallion. This entailed essential landscape and stonework and we were pleased to have this opportunity to work with JMT. 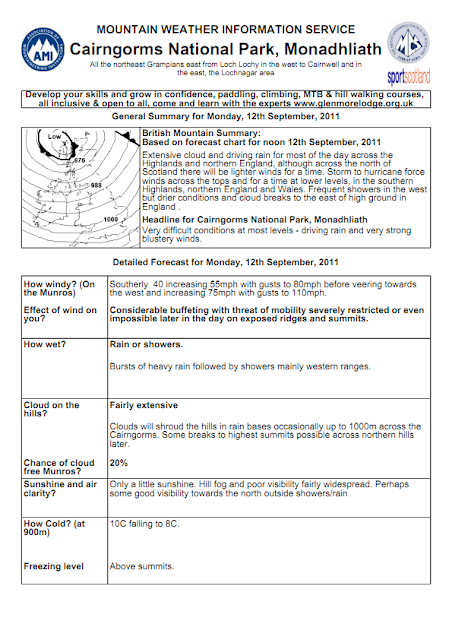 Our teams have completed this years Cairngorm Maintenance program that has seen them working on the constructed paths and trails from Lochnagar in Deeside through to the hill trails of Mar Lodge including Beinn Macdui and then over to Cairngorm Mountain and primarily Coire an Sneachda. This comprehensive maintenance regime has seen our guys walk hundreds of kilometres, clean out countless waterbars and cross drains, and has also seen them construct many extra waterbars, anchor bars, extra ditching, landscaping, and resurface hundreds of metres of path. This work was carried out dilligently and enthusiastically amongst the backdrop of the usual miserable Scottish summer weather! Well done guys, good job. 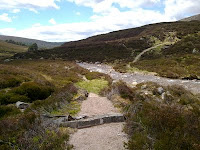 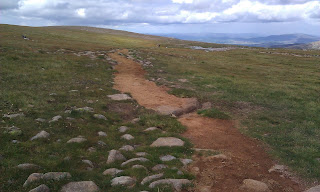 This years part of the Beinn Macdui approach -path definition project , is coming to an end. We have worked in August improving the pathline to encourage more hill users to use a single line, hopefully to help the neighbouring vegetation recover. 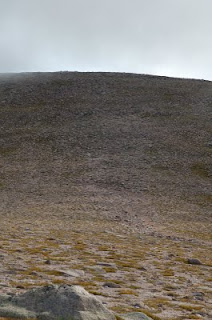 This picture was taken from the plateau between Cairngorm and Pt. 1141. If you look closely you can make out the start of the path but as it steepens it soon disappears from sight. Great for reducing aesthetic impact, not so good for picking a route up the hill side!


The path up the Western Approach to Cairngorm isn't really a path, in fact before we arrived it was just a hill side suffering with massive erosion problems and widespread vegetation loss due to all those walkers wandering up, down and across it's flanks without any direction.

Our mission, as we chose to accept it was to create not a path but a route up the hillside that was more desirable to tread than any other option on the hill.

What is a path? Time for a bit of philosophical introspection... Well a path is something you walk on, something that makes it easier to get from A to B, that keeps the majority of people on one particular line rather than scattered about all over the place. But from another perspective a path can also involve a lot more stuff, both on the ground in its constuction and in its planning and in its conception but i'm getting side tracked.

This path wasn't like most of the paths we normal build, it was a bit of a head scrather from the start and a bit of a ball buster at times too.

As we've finished it is time to relax and enjoy the fruits of our labour. No, not the path this time, our pay packets – to the pub! Tomorrow we'll be working again but tonight we're drinking. And theres no problems a drop of whisky can't solve. Time to talk it through, share our different path building philosophies and generally get a little silly, maybe even enjoy each others company, if only for a short while. Time to get a little lit up.

Its May in the Cairngorms- Snow and Wind!

just to give an idea of the elements we have to endure !... 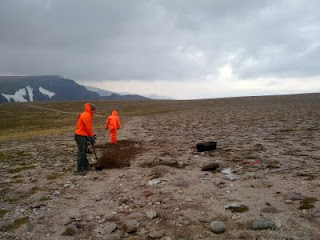 Upland Access has now started the challenging project of the path definition of the Cairngorm Summit to Point 1141. As you can see, this is at 3600ft approx with no clear route and a wide damage zone. The site is very exposed, often in the clouds with high winds. This project should last to June in its initial stage. 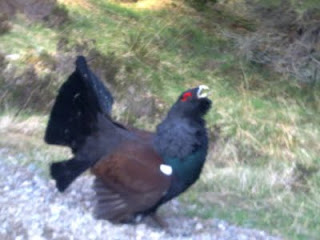 Priviliged! A close up view of Scotlands iconic bird,- very proud and aggressive.

We are recruiting Upland Footpath workers.

Upland Access Ltd are currently looking to recruit Upland Pathworkers for the summer 2011. Full details can be found on our  Job Opportunities page.
Links to this post 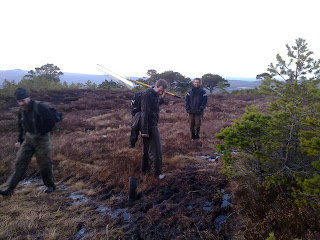 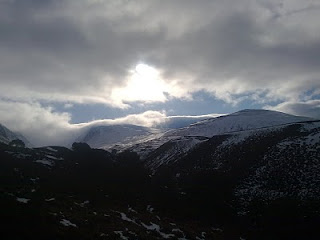 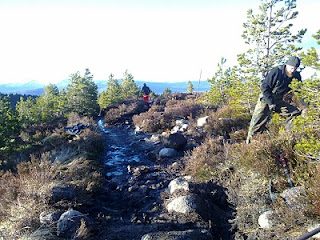 View from Lairig Ghru site with work started but still battling the elements. 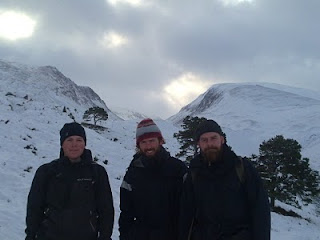 After finishing our projects at Lanark and Lochgilphead we tried to start back in the Cairngorms. Despite the relative low level of the Lairig Ghru the weather has dictated our output today. When will we get a break we ask.? 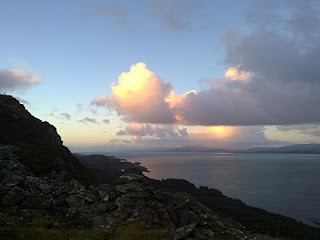 The Dounie section of the Crinan walk is being upgraded by fixing some weak and soft parts of the path and replacing boardwalk with gravel. Heres a view from the top of the hill.

Some of Our Clients

Plan your journey by public transport